Greenbank Music Village – History
A complete music service working under one roof
Greenbank was started in 1983 by Doog Moody. His aim was to create a centre of excellence undertaking a vast and varied range of musical activities so everybody could share, enjoy and explore music to the full.

Pre-Greenbank:- Doog had worked as a researcher in the science fields of electronics, acoustics and metallurgy amongst other things!, but his main passion was music, teaching had supported him through higher education and just hadn’t gone away!
In 1983 Doog started Greenbank, (which was the name of his house), initially running from home covered teaching, recording, amp repair, amp, PA and equipment manufacture even started a wedding car hire business with a car he built himself.
The idea constantly expanding, developing and evolving, other tutors came aboard and soon the house and outbuildings were not enough, so:-
On June 12th 1998 he bought what was St. Matthews church hall in the High Town area of Luton and built the South of England’s first Music Village, extending the name to ‘Greenbank Music Village’.

Included was it’s own car park, five Rehearsal studios, Eight teaching rooms with up to twenty tutors on tap, plus a fully professional recording studio.

Twenty years later, (now) after a couple of health scares and Doog well into his sixties – March 2018 saw Greenbank Music Village relocated back to Greenbank House approximately half a mile from the Cobden street site. The Cobden Street site was developed into housing now called ‘GreenbankRow’.

Teaching a wide variety of instruments with Doog and a handful of other teachers, a rehearsal studio, direct sales inc. web sales via an ebay shop, guitar setups/repair, plus the wedding car hire.

If you like music you’ll love us.
Open evenings & weekends – any other time just ring 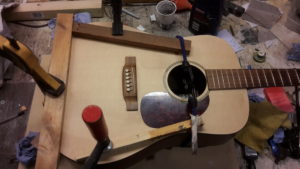 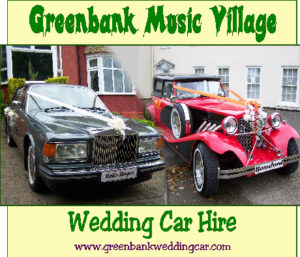